1970-2020 from The Black Studies Institute to Critical Ethnic Studies

In 2020, CCA celebrates a 50 year commitment to the interdisciplinary study of race, ethnicity, indigeneity, and the perspectives and experiences of people of color.

In 1969, Sarah Fabio spoke to the Student-Faculty Institute regarding integrity, "It seems that CCAC or any school, art schools included...should have some responsibility to the needs of the people—all the people, including racial minorities." By the end of 1970, the college had created a Division of Ethnic Studies and an Institute of Black Studies.

Michael Wright, a former student at San Francisco State during the Third World Strike of 1968, was hired by the college as professor of Black History in 1969. Shortly after, in May 1970, Wright submitted a resolution to the Academic Council that the college establish a Division of Ethnic Studies that would include a Black Studies Institute. After much negotiation the college's Academic Council voted to approve the resolution, establishing the college as the only art institution with programming based in Ethnic Studies in 1970.

In 2020, CCA is again the only arts and design college in the US with a designated program based in the discipline of Ethnic Studies. The newly renamed Critical Ethnic Studies (CES) program builds on decades of work. The recent change from Diversity Studies to Critical Ethnic Studies, led by current CES Chair Shylah Hamilton, expands the "move away from multiculturalism, which centers the white experience, toward the Critical Ethnic Studies model in which the marginalized are at the center of discourse (and) allows us to realign ourselves with a discipline, to grow and include the voices of globally silenced peoples.”

At a time when widespread social and political change is being called for, when systemic racism is being challenged, when cis-normative, imperialist, capitalist, white supremacist patriarchy is being critically examined, and when a global pandemic is forcing us to rethink community and identity, we all have work to do. Let's celebrate the college's long investment in this work and also honor being in a moment when the work is not yet done. 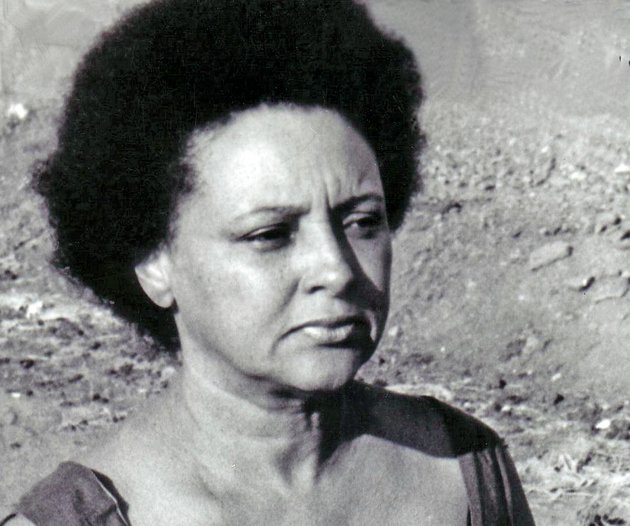 Sarah Fabio, Black Literature professor and poet, worked to improve education for racial minorites at CCAC in the late 1960s.

Sarah Fabio, Black Literature professor and poet, worked to improve education for racial minorites at CCAC in the late 1960s.

In 1969 Sarah Fabio, as part of the CCAC Student-Faculty Institute, called for the school's increased responsibility toward "the people--all the people including racial minorities", for developing a new academic system that could provide the black students of CCAC with an education that would enable them "to move toward a sense of integrity" 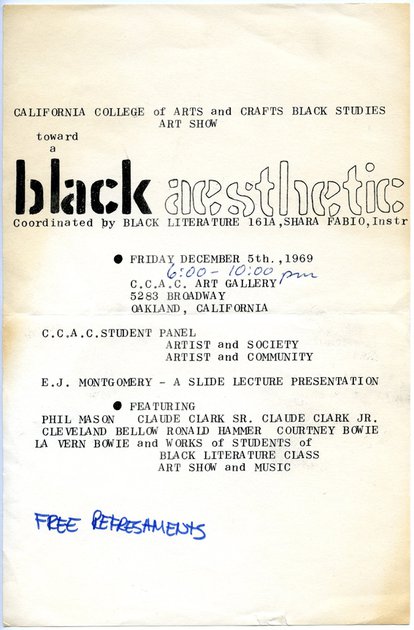 Toward a Black Aesthetic exhibit coordinated by Sarah Fabio in 1969

Toward a Black Aesthetic exhibit coordinated by Sarah Fabio in 1969

This event introduced a black perspective on the arts and was coordinated by Sarah Webster Fabio. The program included prominent Bay Area Black artists and educators along with CCAC students. Fabio was a powerful voice in the advocacy for a black studies program at the college. 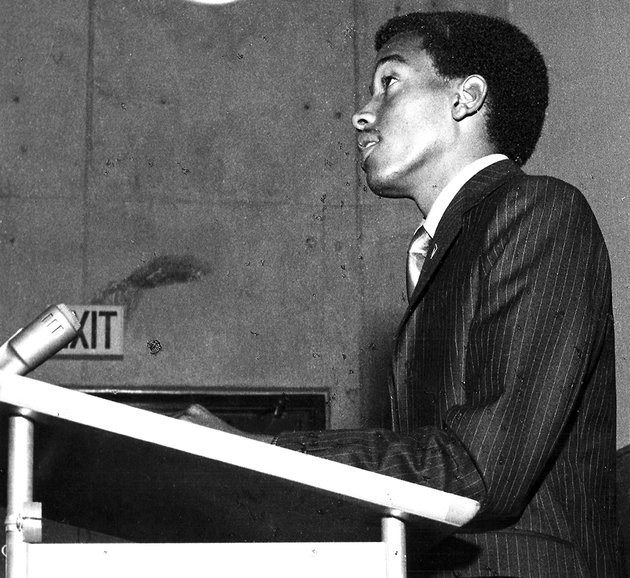 Michael Wright founded the Black Studies Institute and the Ethnic Arts Division in 1970.

Michael Wright founded the Black Studies Institute and the Ethnic Arts Division in 1970.

Wright initiated the Black Studies Institute, founded in partnership with the Black Students' Union, under the newly created the Ethnic Art Studies division in 1970. The program was unique in that study generated from the art discipline, unlike the humanities root of university programs. 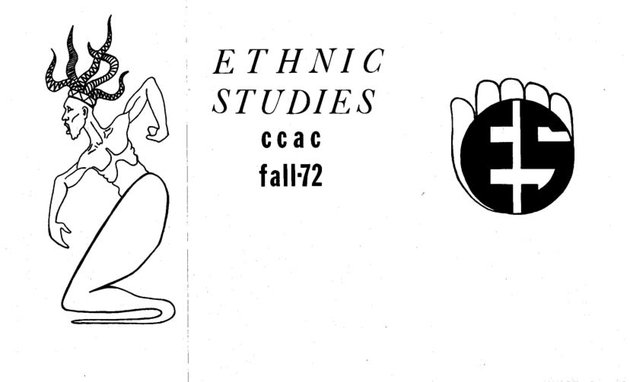 Shaping of the Ethnic Studies programs and the Black Studies Institute was inspired by the dramatic examples of the Third World Liberation Front led strike at San Francisco State College (now SFSU) and organizing at UC Berkeley that resulted in Ethnic Studies colleges and programs at both universities. 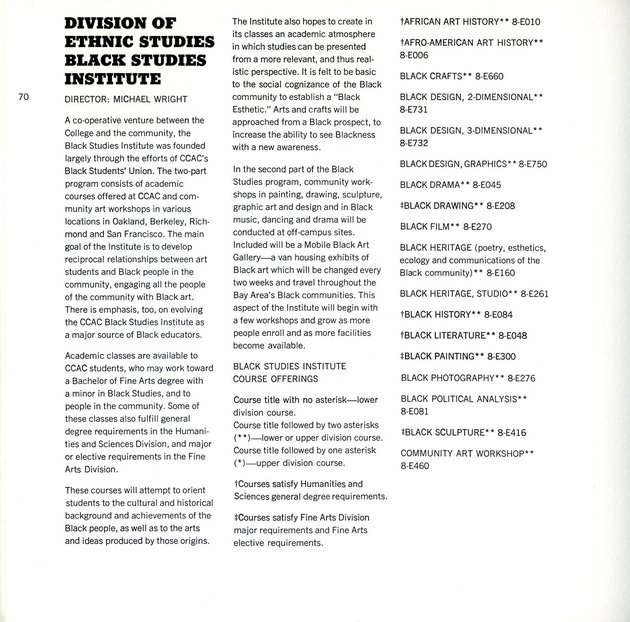 Excerpt from Calfornia College of Arts and Crafts 1971-72

Newly appointed faculty Michael Wright developed courses in response to the civil rights movement and the Black Studies curriculum of neighboring universities. The aims and objectives were: to improve communications and human relations between black and white students at the college; to allow a guided confrontation and meaningful dialogue to exist between concerning America’s most serious internal crisis; to further the black student’s awareness of his own identity and history; to allow the white student to gain an awareness of the black man’s problems and aspirations; to correct inadequacies and imbalances propagated by our educational system. 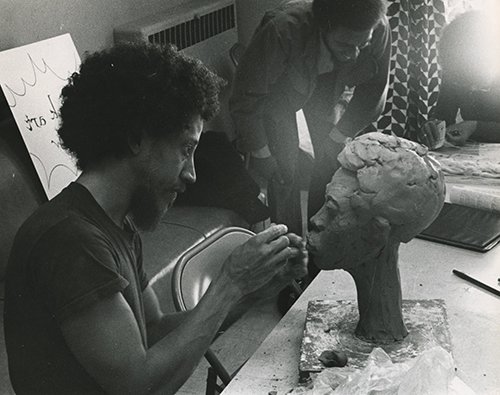 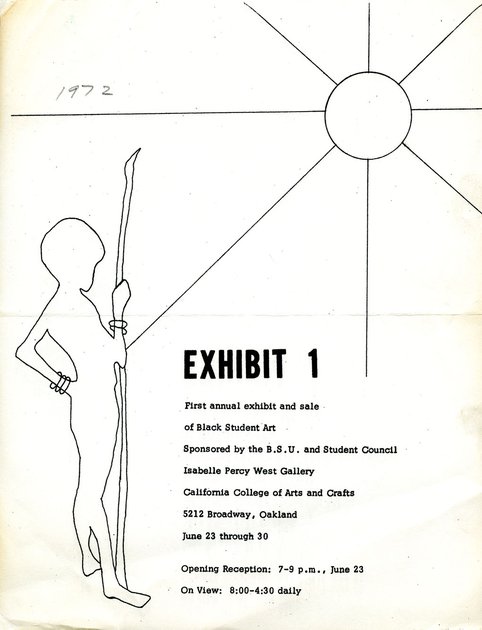 This exhibition announcement marks the historic moment when the first black student art show was organized and opened at the college. 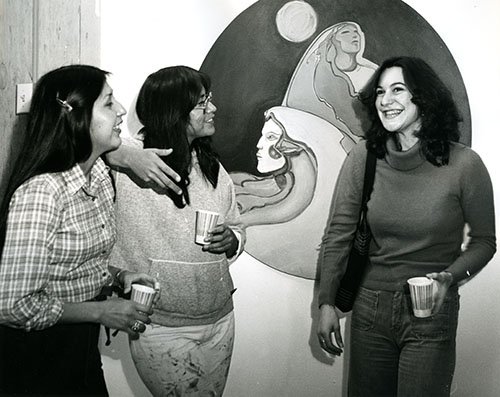 The national demands for scholarly programs that focused on the understudied histories and situations of African Americans, Asian Americans, Chicanos, and Native Americans, as well as national and global decolonial uprisings outlined the contemporary definition of diversity in post-secondary education. 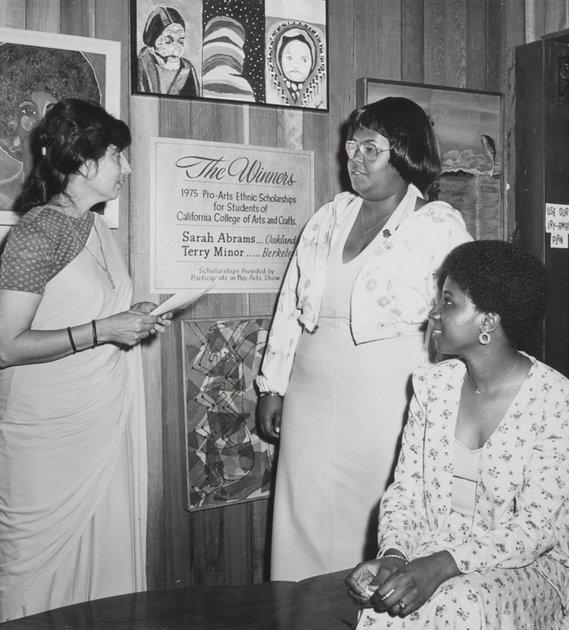 Wright identified that underrepresented students needed funding in order to afford the cost of art education and worked with the college to find sources for scholarships like the one awarded in this photograph.

Wright identified that underrepresented students needed funding in order to afford the cost of art education and worked with the college to find sources for scholarships like the one awarded in this photograph. 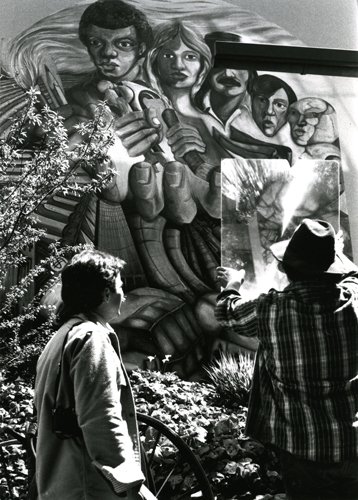 This on campus mural was produced in the Mexican and Chicano Public Art course, initiated by Malaquias Montoya. Students in the course created group statements on current issues and painted the murals on the Martinez building. The course reinforced the Ethnic Studies intention to introduce students to the “arts and cultures of ethnic minorities in the United States.” 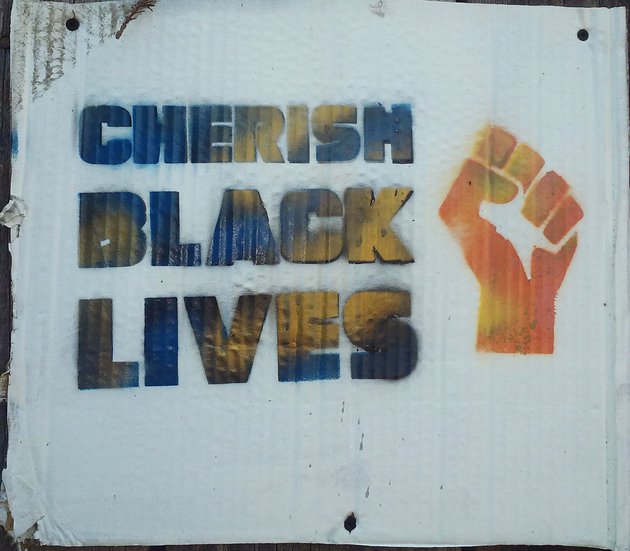 In 2014 police brutality and the resulting protests in Ferguson in New York and around the US, inspired student and faculty activism. 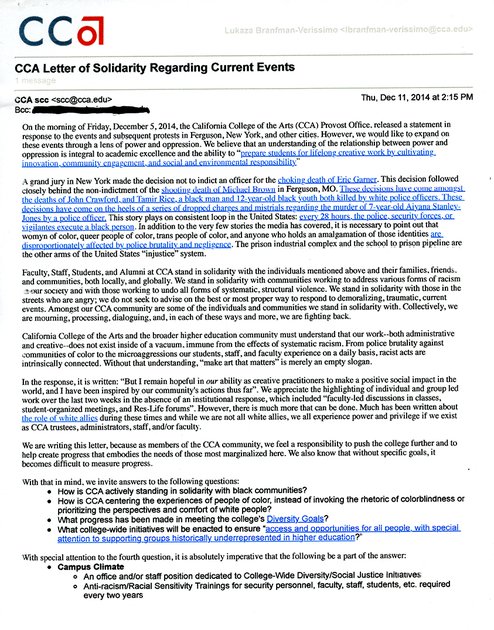 In 2014 the SCC wrote a letter, which was endorsed with the signatures of students, faculty, staff and alumni across CCA, to take a stand in solidarity with "those working to undo all forms of systemic and structural violence" and sought to "push the college further...to help create progress that embodies the needs of those most marginalized here" by outlining specific goals relating to Campus Climate, Curriculum and Enrollment, that would "lay a foundation for and bring to light the need for greater support systems for students across all marginalized identities at CCA". 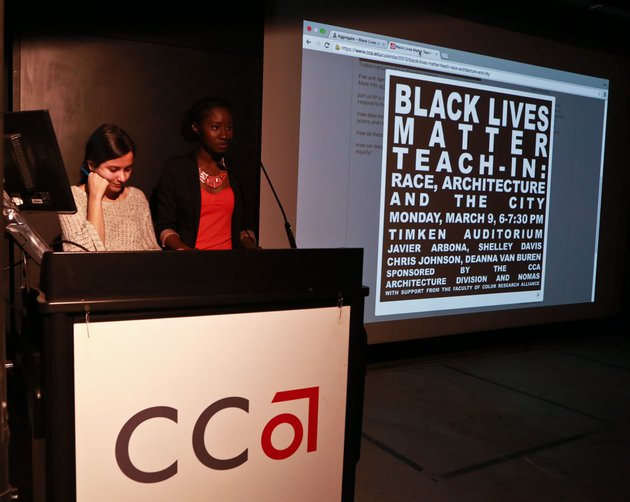 In 2014 and 2015 campus forums led by faculty and students were conducted to discuss how the college could stand in solidarity with black communities and center the experiences of people of color.

Black Lives Matter Teach-In on Race, Architecture, and the City, 2015 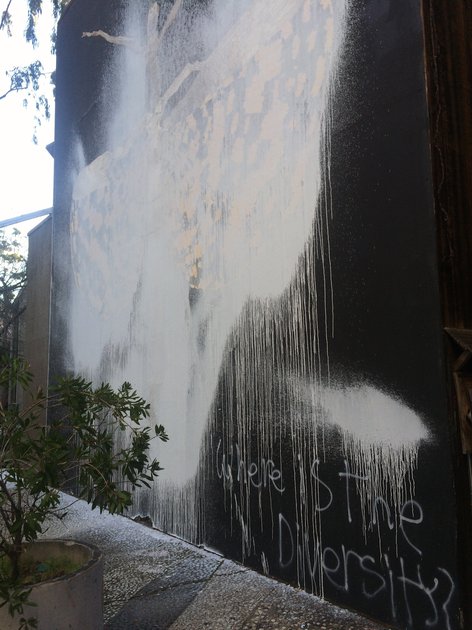 In the midst of the community forums the mural on Martinez Hall was attacked and obliterated. Provost and Diversity Studies faculty create a project that empowered a student team to respond with a collective statement in support of diversity at CCA.

The Walking Stick mural was created in 2003 by Greg Dalton and Jonah Olson. 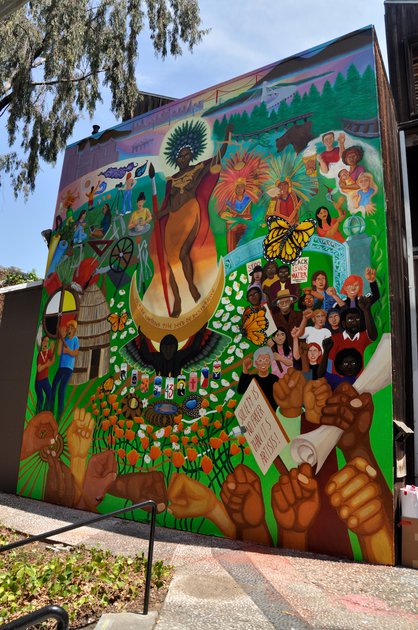 A team of six students combined the Virgin of Guadalupe with the legendary goddess Califia – source for the name “California” – to create a goddess of creativity, justice, and nature.

A team of six students combined the Virgin of Guadalupe with the legendary goddess Califia – source for the name “California” – to create a goddess of creativity, justice, and nature. 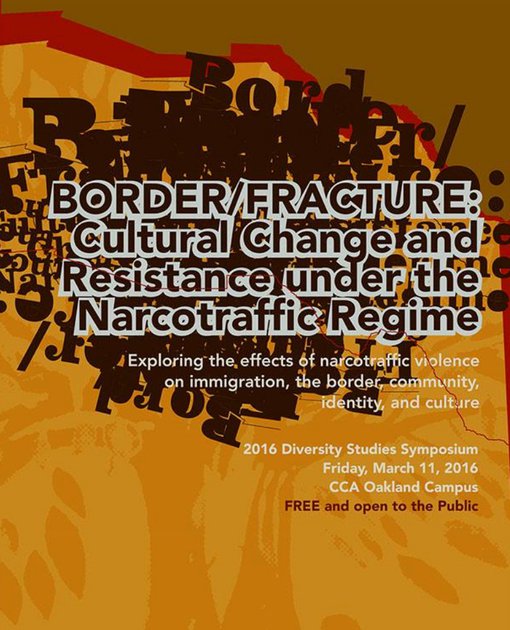 A series of symposiums were organized by Diversity Studies including this 2016 event Border/Fracture, "exploring the effects of narcotraffic violence on immigration, the border, community and identity" 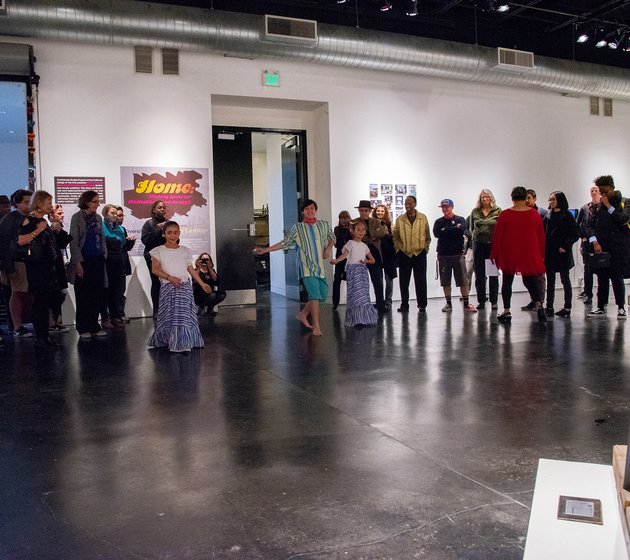 In 2018 Diversity Studies rejoined the Humanity and Sciences Division, where it had been prior to a period of oversight from the Provost's Office during the 2000s, which was celebrated with the HOME Diversity Studies Faculty Exhibition. 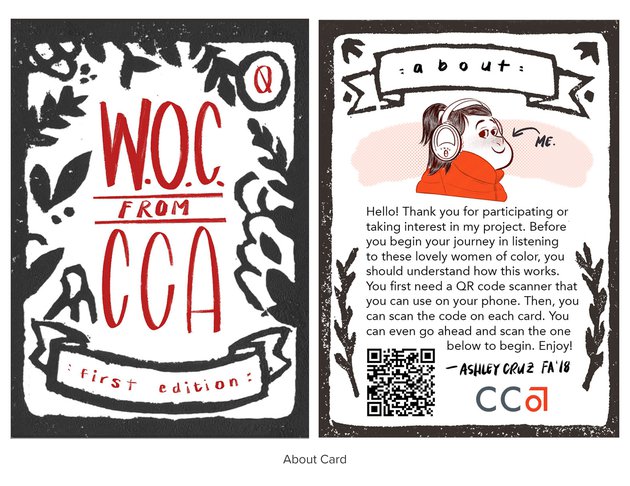 Women of Color from CCA reflects the experiences of students and professors of CCA in 2018. 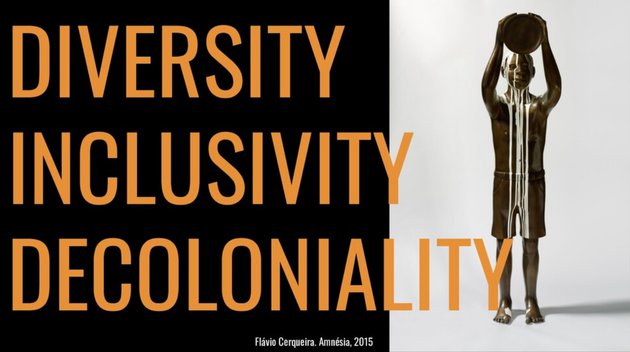 In 2019 workshops and events working toward decolonizing academia at CCA and promote awareness, change and a more thriving educational climate took place.

In 2019 workshops and events working toward decolonizing academia at CCA and promote awareness, change and a more thriving educational climate took place. 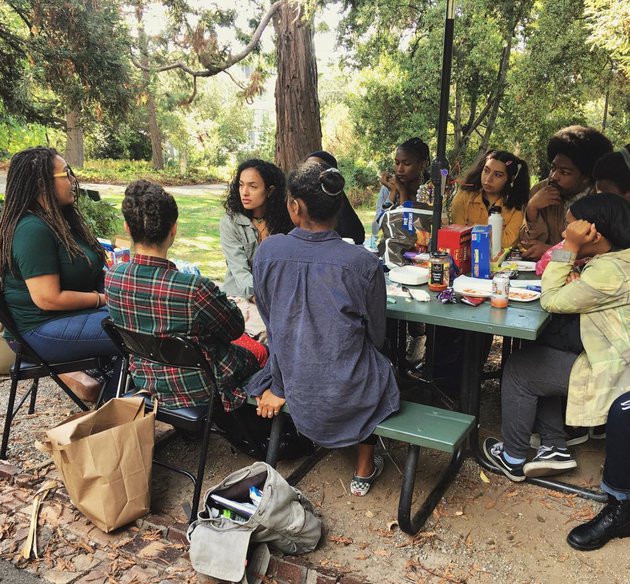 photograph courtesy of the Students of Color Coalition

Shylah Hamilton with the Students of Color Coalition, 2018 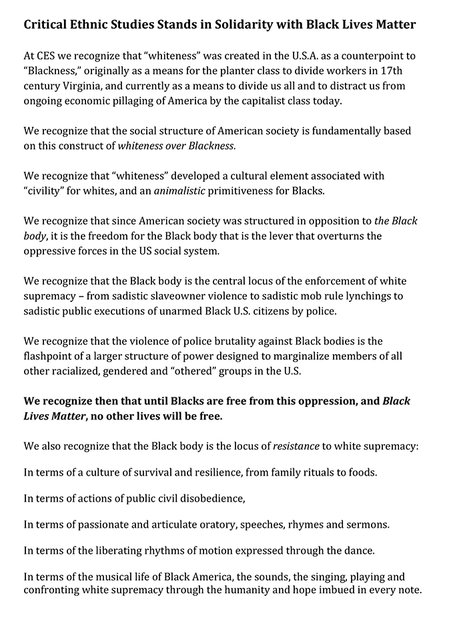 CES faculty, with Rickey Vincent as the originating author and primary writer

In a written response to the events and sentiments of spring and summer of 2020, Ricki Vincent wrote “we exist in an environment of “anti-blackness” that inhibits our growth toward a truly inclusive and affirming community of human beings of equally infinite value...Until Blacks are free from oppression, and Black Lives Matter, no other lives will be free.” 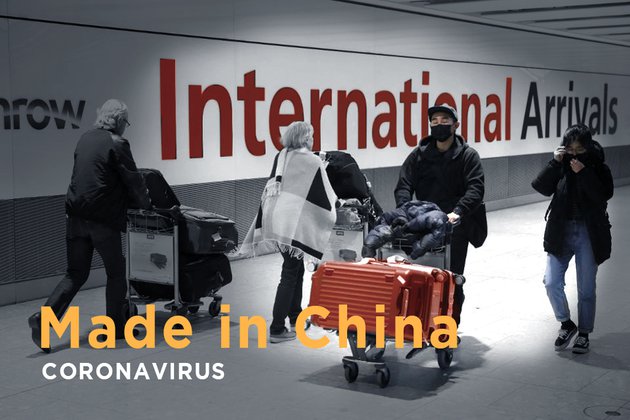 CES students create works that explore experiences of marginality: locally, nationally and internationally. This satirical poster brings awareness to how xenophobic stereotyping proliferated with the pandemic.

Made in China satirical poster, by Yujia (Rita) Lei 2020 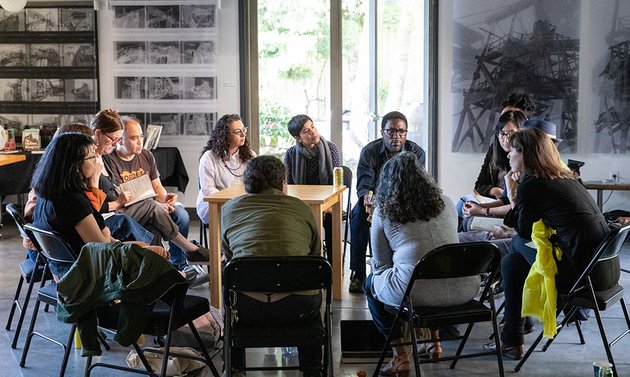 Faculty from around the college are coming together to do work that aligns with the values of CES, here at the Decolonial Unconference

Faculty from around the college are coming together to do work that aligns with the values of CES, here at the Decolonial Unconference

organized by Shalini Agrawal and Katherine Lam of the Decolonial School, spring 2020

The Decolonial School is an interdisciplinary cohort of CCA faculty committed to building a new curricular model for art and design education that foregrounds Indigenous practices and acknowledges decolonization as a continuous process. 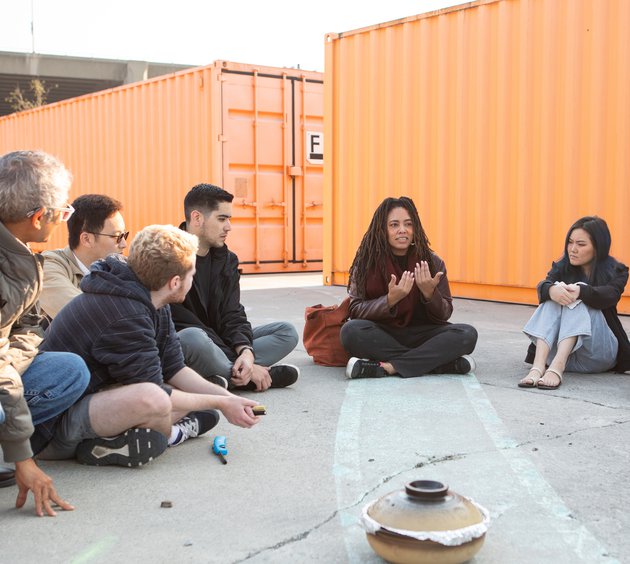 In 2020, CES Chair Shylah Hamilton looks forward to a future in which “students come to CCA and are supported by the program to learn about what Critical Ethnic Studies, as a discipline in theory and practice, can be at an art and design institution."

As Critical Ethnic Studies moves forward into a new chapter there are plans for a CES program that is highly respected, with increased institutional support for programming growth and additional tenured positions, with professional support for faculty in an environment where professors feel valued and where CCA students can earn either a major or a minor in Critical Ethnic Studies.